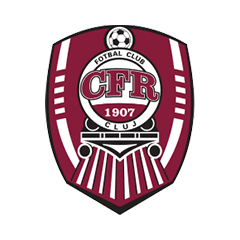 Teams have met each other four times in history. Roma won twice. Roma is unbeaten at home in nine home matches. Cluj has not lost in two away games.

After a not-so-good start to the season, Paulo Fonseca's men got a good move. The team does not lose in six matches. Thanks to the last victory over Fiorentina (2:0), they managed to move up to the eighth position in Serie A.

Together with Cluj Roma shares the leadership in Group A in the Europa League. Teams have four points each after defeating Young Boys (2:1) and a goalless draw with CSKA Sofia (0:0).

The next match will be conceded by the injured, namely by Nicolo Zagnollo, Davide Santon, Javier Pastore. Amado Diavarra and Riccardo Calafiori are in quarantine, whereas Gianluca Mancini has been disqualified.

Dan Petrescu's wards focused on quality performances in the Europa League, sacrificing the national championship. After nine rounds played in the Romanian Championship, the team is in third position. In the last round Cluj's first defeat against Gaz Metana (1:2) was recorded. The gap from the leader is already six points.

The railroad workers in the Europa League are leading together with Roma thanks to the victory over CSKA (2:0) and a draw with Young Boys (1:1).

We believe that after a draw with CSKA Sofia, Roma will aim to take three points. The team needs to resolve the issue of reaching the Europa League playoffs as soon as possible so that they can focus on their performance in Serie A. It was in the championship that a large number of points were lost at the start of the season. Now they need to make up for lost time, since the club's task is to qualify for the Champions League next season.

Cluj looks very good in the Europa League, but the team is inferior to its opponent in speed and technical skill. In our opinion, hosts will do everything to arrange a confident victory and for this they have all ingredients.

Our prediction is that Roma will win, taking into account the handicap (-1.5) for the odds of 2.04 at the 1xBet bookmaker.