Barrow vs Aston Villa: should we expect a cup surprise?

Barrow vs Aston Villa: should we expect a cup surprise? 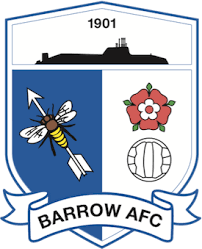 "Barrow" stars from heaven are not enough. The team plays in the fourth strongest division in England, while the team managed to break into the second round of the cup. In this draw the Bluebirds started with a 1:0 win over Scunthorpe United. Mark Cooper's wards converted their moment and played reliably in defense, having managed to defend a minimal advantage. In the championship, the “bluebirds” are not doing well. In the last round the away team lost to Harrogate (1:2). After 4 rounds "Barrow" occupies only 16th place in the table.

In the cup game hosts will not be able to count on a trio of players: Thomas Biding, Mike Jones and Matthew Platt. They are injured.

Aston Villa has a rich history in the League Cup. The team has won the trophy five times. The last triumph dates back to 1996. At present, the Lions do not shine with results. According to the results of the last season, the team finished 11th in the Premier League, which was their best result in 10 years.

In the cup game we expect rotation from the Birminghamians. We can say for sure that Morgan Sanson, Bertrand Traore, Trezeguet and Ollie Watkins will not help the guests. This quartet of footballers is traumatized.

"Barrow" has already shown a good result in the cup. The team can hardly count on further advancement in the tournament bracket. Hosts were frankly unlucky with the drawing of lots in the tournament, while in the championship team needed to score points so that they would not fall out of the struggle for a promotion at the start.

Aston Villa is focused on fighting in the cup. The team will not be forgiven for an early departure. “Lions”, given the level of skill and class of performers, have good chances to pass the starting rounds of the league cup. Suppose, that the first round the Birmingham people will be able to overcome with a margin.

Before the start of the match guests look more solid. Prediction is for Asian handicap (-1) at Aston Villa. In BC 1xBet such an outcome is offered with odds of 1.65.

Birmingham played a great defense over the weekend. "Barrow", even at the level of League 2, does not stand out for its attacking actions. Therefore, let's assume that a representative of the elite will be able to continue its dry streak in the season.

Our second bet will be that Barrow won't score. Such a bet can be placed in 2.17.